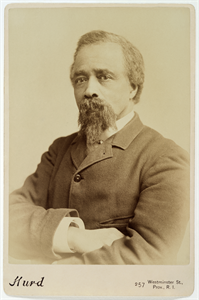 Edward M. Bannister
Canadian-American Painter
Canadian-American, (1828–1901)
About the Artist
A noted artist and activist, Bannister was a contemporary of renowned painters Henry Ossa Tanner and Robert Duncanson. Before receiving critical acclaim for his work, he held several jobs. Early in his career, Bannister worked as a barber; he painted in his spare time. Bannister also reportedly studied at the Lowell Institute (Boston) where he is said been instructed by noted sculptor-anatomist Dr. William Rimmer.

Bannister, whose style is often associated with the Barbizon School (1830-1870), garnered critical acclaim for his work when he won a first prize medal for his painting Under the Oaks at the 1876 Philadelphia Centennial Exposition. Judges attempted to rescind Bannisterâs award after discovering that he was Black. However, with the backing of his fellow competitors, Bannister prevailed and was allowed to keep his prize.

The majority of his works--- landscapes, depict serene, pastoral scenes, employ the use of somber tones on thickly impastoed canvases, with abbreviated strokes similar that bear similarity to Impressionist techniques. Aside from his other paintings, Bannister was commissioned to produce other works-- mostly landscapes and portraits. These images include The Newsboy (1869), River Scene (1883), Sabin Point, Narragansett Bay (1885) and Palmer River (1885).


Aside from his work as an artist, Bannister was also well-known for his activism. He, along with his wife Christina Carteaux, successfully navigated the racist cultural milieu of their day. Both, prominent activists, the Bannisters supported abolitionists causes and the institutionalization of local arts efforts. He is remembered for co-founding and serving as a member of the Providence Art Club and for being a original board member at the Rhode Island School of Design.

According to the Clubâs website founders of the Providence Art Club decided that it would be âa place to gather, and exhibition gallery where artists could show their work and collectors could find good pictures.â
Until his death in 1901, Bannister was well liked and respected by Providence Art Club members. Providence, which he co-founded, mounted a memorial exhibition of 101 of Bannisterâs paintings.
In 1978, Rhode Island College named the Bannister Art Gallery in his honor.

Notable
Edward M. Bannister is said to have been the only major African-American artist of the late nineteenth century who developed his talents without the benefit of European exposure.

Landscape with Dock and Water (#37)

Landscape with roof tops behind trees (#49)

Your current search criteria is: Artist is "Edward M. Bannister".